Here are the differences between "Standard" and "Deluxe" interiors

There are always alot of questions regarding interiors and what was available in what year and what they looked like. I have gathered some photos together and will try to give examples of the different interiors for the different years and what also differentiates one from another. For most years, there were "Standard" and "Deluxe" (also called "Custom") interiors. Throughout many of the years, the difference between Standard Interiors and Deluxe Interiors has varied in both seat design and also door panel design. The rest of the interior such as the carpet, headliner and other panels pretty much stayed the same. Two of the main differences that covered many years is the dash and the rear quarter trim. For Standard Interior cars, there was no dash grab handle present, but the Deluxe Interior did get a dash grab handle.

Now with those two small differences out of the way, we can also talk about some of the items that are NOT part of Deluxe or Standard Interiors. When you look at today's cars, you can order packages that will include alot of different items. So today when you order a package it will include many things like power windows, power locks, upgraded stereo system, A/C, sunroof and more all as one option or upgrade. Back in the 70's, the interior packages and options were basically all "a'la carte" so to speak. So when you ordered the Deluxe Interior, it came with the deluxe seats and door panels and the ash trays and dash grab handle listed above. But that was it......Items like power windows, power door locks, deluxe interior light package, A/C, rear defogger, etc. were all a separate order. So you could have a deluxe interior, but no power door locks or no power windows. That was a separate line item on the order sheet. So you could also have power windows, but not power door locks. You could have A/C but no rear defogger. Everything was ordered separately back then so don't get confused when looking at a car if it has the Deluxe Interior but no power options. 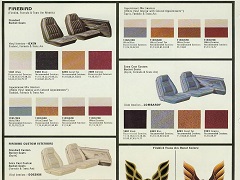 Need to find out your interior code? Then check these pages out for all of the listings for interior codes for the year you need. They are listed all from 1967 to 1981. 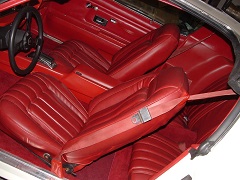 If you need to replace your seat covers or other interior parts, check out the store. You can find replacement seat covers, door panels, carpets, headliners and more. I carry both PUI Interiors and Legendary Auto Interiors. 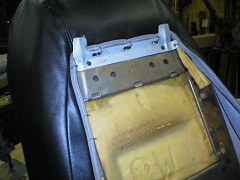 Need to find out how to recover your seats. Check out this page for a step by step guide on how to do it. There will also be other helpful restoration tips posted soon as well. 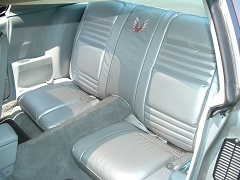 There were a few cars out there that had specialty one off interiors. Ones like the 1979 10th Anniversary Trans Am or the 1980 and 1981 Turbo Pace Cars.

What year and style seat do you have in your car?

Below are just some example of the different interiors for the different years. I have tried to group them into major interior changes for the years. There are small changes from year to year that I have not noted here. For example, the deluxe seats from 1976 and 1977 have the same basic shape overall with the horse-collar seats, but the inner vertical pleats on the seats in 1976 had perforations whereas the vertical pleats in 1977 were smooth. So I have not pointed out all of the small changes from year to year. What I tried to accomplish here is giving you some photo representations of the differences in the seats from year to year with the major changes. That way if you are looking to purchase a 1979 and you see by the photos here that they have 1977 seats in them, you know something is wrong.